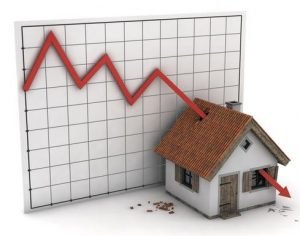 The pandemic’s housing boom is finally running on fumes. Now, Freddie Mac economists are predicting the arrival of the biggest housing contraction since 2006. They point to three factors:

This Great Deceleration is expected to be a lot bigger than a seasonal cooldown. The economic shock of higher mortgage rates means borrowers are getting stretched thin to a degree unseen since 2006.

Home shoppers in April and May finally balked at record home prices. Moody’s Analytics chief economist Mark Zandi tells Fortune that this shift is the start of a full-blown housing correction. Zandi predicts the year-over-year rate of U.S. home price growth will plummet from the all-time high of 20.6% to 0% by this time next year.

On Wednesday, we learned that U.S. purchase applications last week were 20.5% lower than the same week in 2021. This is also down 40% from the beginning of the pandemic.

Freddie Mac Economist Len Kiefer tweeted about what this means:

The U.S. housing market is at the beginning stages of the most significant contraction in activity since 2006.

Over the past year, the monthly P&I payments on new mortgages has risen a 35%. For perspective, private-sector wages grew 4.8% over the same period. That spike is a direct result of both record home price growth and higher mortgage rates. It also adds up to an additional $670 per month. That has “obliterated affordability,” tweets Kiefer.

This housing slowdown is by design. Earlier this year, financial markets priced up mortgage rates. That saw the average 30-year fixed mortgage rate spike from 3.11% in December to 5.09% as of last week. The Fed figured if it can slow down the housing market, then it can begin to rein in inflation.

This sharp contraction in mortgage applications is similar to the one that began in 2006. That turned out to be the onset of a housing slump that culminated in the financial crisis of 2008. But Zandi doesn’t think we’re headed back there. This time around, homeowners are in much better financial shape.

Zandi doesn’t foresee U.S. home prices falling nationally over the coming year. However, he forecasts this “housing correction” will likely result in 5% to 10% price reductions in significantly “overvalued” housing markets like Boise and Charlotte.

Also, check out other real estate stories on the FSBO Marketing Solutions Blog.