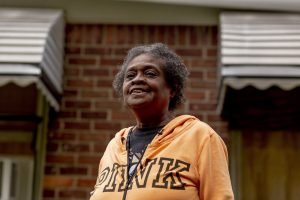 A Detroit grandmother faced eviction after she fell victim to a fake landlord scam is getting the chance to buy her home.

June Walker, 65, signed a rent-to-own lease on a three-bedroom bungalow in 2019. She spent the next two years fixing it up. Meanwhile, she paid $550 a month to a man who claimed to work for her landlord.

She thought she’d bought the house until June 2021. That was until the home’s actual owner filed to evict her. Public records show a Miami based real estate company called Boccafe LLC owns Walker’s home.

Walker’s case was one of several NBC News and Outlier Media reported on last fall in an investigation of the scam. The scammer pretends to work for or claims to be the owner of the home. They then sell or rent vacant homes they don’t own.

Walker’s attorneys negotiated an agreement in Detroit’s 36th District housing court. The agreement paved the way to end the eviction. Boccafe pledged to sell Walker the house for $45,000. A anonymous donor is giving Walker money to buy the home. The donor read about her case on NBC News.

One of Walker’s lawyers, Ted Phillips, the executive director of the United Community Housing Coalition, a Detroit housing advocacy organization, was glad to see Walker’s case resolved but said most victims of the “fake landlord” scam lose their homes.

How Did Boccafe LLC Get Wrapped Up In A Fake Landlord Scam?

They did not respond to requests for comment by NBC News. NBC News sent requests by social media and to an Argentine email address that was listed in Florida business records. However, the two brothers did not respond.

Records show Boccafe owns 15 properties in Detroit that it bought mostly within the last two years. Walker’s house is one of three that Boccafe bought in June from a Pennsylvania company called RHMS Group, which owns nearly 70 properties around the city.

RHMS Group, which bought Walker’s house in a 2017 tax auction, was the owner when she moved in. RHMS Group’s president said he believed the house was vacant from 2018 until he sold it this year.