Real estate investing is usually reserved for experienced real estate investors. Yet, Abraham Anderson is an exception. He was only 21 years old when he bought a 20-unit apartment building.

Real-estate agents refused to take him seriously when he first started looking for properties. Their faces would drop very time he pulled up to view a property and they’d think their time would be wasted, he said.

So he started bringing a document to show them that a bank had pre-approved him for financing.

Today, he’s 26 years old and owns almost 1,300 rental units, according to public property records reviewed by Insider. And no, he didn’t have a co-signer or a financial backer when he started.

Anderson’s units are a mixture of apartments, single-family homes, and lots with mobile homes. He owns some of the properties outright and is the part owner of others.

Anderson is also not some real estate guru. He also doesn’t have a college degree.

Anderson started selling insurance upon graduating from high school. He worked for commissions unlike most teenagers. Yet to him, it meant there wasn’t an hourly limit on his income.

In his first year, he earned $143,000 as an insurance agent. He was smart and frugal. He lived with his parents and saved every penny.

Anderson told Business Insider he would sleep in his car instead of getting a hotel when traveling to close a deal. A loaf of bread from the local Walmart would be his breakfast. The sacrifice wasn’t pretty. However, the payout was worth it for Anderson.

The saved-up income changed his life. It put him on a path that made him financially free in a matter of a few years.

He used the saved up money to buy a piece of land that he eventually built four units on. This was the first in his portfolio that would eventually scale to thousands. He cultivated relationships and a crafted a careful loan-application strategy. 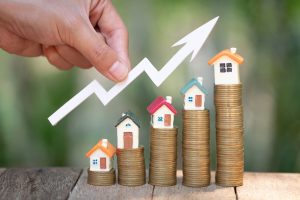 Anderson said he had $56,000 ready to put towards a piece of land. He focused on in Cleveland, Tennessee. However, it was vacant property and units would need to be built. Anderson’s friend’s dad was contractor.

To fund the project, Anderson applied for a construction loan from a small local bank. Normally it wouldn’t be easy to get a loan at such a young age and with barely a year’s worth of income.

But he had a few pullable strings. First, he went to a bank that the building contractor recommended. The contractor had a relationship with the bank because he had done deals for other construction projects.

I would highly recommend people just talk to local banks, not even regional or national ones. Local banks, you can talk to people who can make decisions, and they know the community, and they’re just a lot easier to work with.

Second, he submitted a folder with different items to help prove his ability to pay back the loan. Anderson didn’t have a tax return at the time. So instead, he put in awards he received for being a top salesperson and a copy of his bank statement to show his savings. He also included a printout of his credit score, and a blueprint of his plan.

Anderson applied for $300,000. However, he didn’t get the entire amount at once. Instead, every expense would need to be cleared by the bank. Once approved, they’d release the funds. When construction was complete, the terms switched to principal and interest payments.

Anderson’s first deal was a flip property. He pocketed $74,000 when he sold the property.

In hindsight, it was a process he wouldn’t recommend a contruction project for a first-time investor. Anderson claims he would have seen a better ROI if he had flipped a property that just needed an upgrade. Secondly, it was a lot more work. However, it was an accessible avenue for him at the time because the loan was more attainable than a mortgage.

Anderson Increases The Value Of Real Estate Investing In His Portfolio

Anderson did something most inexperienced real estate investors don’t do. He kept his job and his aggressively frugal saving strategy when he was building his first property. This meant he saved up another $150,000 that year. He put the money towards a multi-purpose property he used as an office and living space.

Although, it wasn’t a cash-flowing property, he was able to use it as collateral on his next purchase. This property would be the property that would set him up for financial freedom.

Anderson’s next purchase, for something over five units so that it would be considered a commercial property. The first reason was that it was easier to get a loan. The second was it gave him more control over its appreciation potential.

He now loves to teach others how to invest in commercial real estate. His website Capital Cashflow and YouTube channel are free resources that teach people how to find and vet properties and pick tenants.