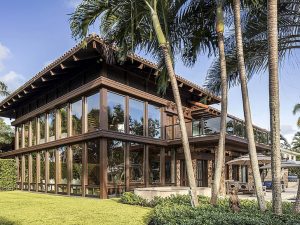 Jonas is a singer with The Jonas Brothers. Sophie Turner is known for playing Stansa Stark on the hit HBO series, Game of Thrones.

The purchase also comes three months after the couple listed their 15,000-square-foot Encino mansion for $16.8 million.

The 10,416-square-foot Miami mansion has six bedrooms and eight and a half bathrooms. It also sits on a 0.4-acre lot. In addition, the property features indoor gardens and a koi pond. The house also contains a wine cellar, fireplace and pool.

The sellers are Luis Arguello Jr. and Sylvia Chamorro.

Arguello and Chamorro listed the property in September 2020 for nearly $12 million. Dina Goldentayer of Douglas Elliman co-listed the house with Chamorro. Carl Gambino of Compass also represented the buyer. Unfortunately, Gambino did not respond to a request for comment.

Chirino sold the property in 2014 for $4.2 million. Chirino owned it between 1992 and 2014, according to property records. Arguello is chairperson and CEO of DemeTech. Demetech is a Miami-based maker of surgical sutures, mesh and bone wax.

Bay Point is located north of downtown Miami and the Miami Design District. The community has also seen a bump in high-end home sales. In December, a former Goldman Sachs executive bought a waterfront home in the neighborhood for $11.3 million. Thus, setting a record for the community.

In May, Jessica Goldman Srebnick and her husband also purchased a Bay Point home for $9.2 million.

This Article Originally Appeared On MFI-Miami On 9/22/2021